I’ve mentioned before that my mother is my story-telling idol.  Well, she’s one of several…  My storytelling-on-pages idol is Robert Jordan (who had the audacity to go and die before finishing the Wheel of Time series I’ve been waiting on since I picked up the first book in 1992… though I’m relieved to report that his hand-picked replacement, Brandon Sanderson, is doing a marvelous job at finishing for him). My storytelling-on-screen idol is Peter Jackson (whose Lord of the Rings work is one of the few examples of a movie being better than the book, while managing still to stay true to the book itself… anyone in the business of storytelling should listen to the directors’-and-writers’ commentary voiced over the film, and the hours of how-we-did-it footage!). And my real-life storytelling-in-person idols have always been my mother and my two grandfathers.

So I was delighted this week to get a package in the mail: a T-shirt which my mom had made for each of us, and which she says every writer and storyteller should wear.  I’ll tell you about it in a minute.

One of my mom’s storytelling skills is the ability to recount an event or experience with all the verve and visual description and humor and dramatic timing that makes it a story worth listening to–and if she tweaks minor details for the sake of a more enjoyable story, I say “hats off” to her for employing the skill!

Her stories never misrepresented the actual heart or substance of our family life–but they were undeniably better entertainment than a strict “reporting” would have been.  So, to quote Philip Lopate in his introduction to The Art of the Personal Essay: “I learned the art of lying at my mother’s knee.”

As part of my M.F.A. program in Creative Writing, I took several workshop-classes in the genre of “Creative Non-Fiction”–essay-writing as it was meant to be done, as opposed to the awful five-paragraph beast which so many English teachers inflict on their suffering students.  Essay-writing-storytelling like what we find in the art of Michel Montaigne, or E.B. White, or George Orwell, or Joan Didion, or David Sedaris…  What I hadn’t expected in these classes was the semester-long raging debate on the ethics of truth-telling in personal essays.

When it comes to Creative Nonfiction, there are those who are firmly entrenched in the “Nonfiction” end of the spectrum (you should never say the barn was red if it was actually yellow), and those who embrace the “Creative” end of the spectrum (It’s my story, dammit, and I’ll tell it however I like), and of course a whole range of viewpoints along the center of the spectrum, where my mother and I both stand, believing that minor details can be tweaked for the sake of Story, if the heart of the “true” experience isn’t damaged by doing so.  My professor in this class had pitched his tent in the don’t-call-a-red-barn-yellow camp, and the classroom debates actually got quite heated.

So at the end of the semester, I settled on a project that would explore the aspect of truth-telling in personal essays.  (Or not, as the case may be.)  I wrote a ten-page personal essay about the houses I’d lived in while growing up, but the essay itself was just a starting point.  I asked my prof to read it with his “B.S. detector” engaged, and make notes about what things he thought I was inventing or altering.  I also gave it to my sister and my mom to read, since they were present in those stories themselves, and asked each of them to make note of every detail I’d “fudged.”  And I went through the essay myself, making my own notes about the details I had deliberately altered, or wasn’t 100% sure of.

What surprised me most, in assembling the collected comments, were the facts I’d gotten wrong without knowing it!  Childhood memories of which I was absolutely certain, yet I’d gotten a detail wrong that I would have been willing to swear to in court.  Which discovery, in itself, serves to highlight one of the potential pitfalls of personal memoir: Memory isn’t a sure thing at all!

As I’d predicted, my professor called B.S. on items that were completely true, and had no idea about the details I’d altered (either inadvertently due to inaccurate memory, or deliberately for the sake of the story’s flow).  It was a fun project, and even my stickler-professor enjoyed the outcome, though he still frowned on the underlying fact of my fearless fudging.

I went on after that class, writing as I always have and probably always will. There actually aren’t that many occasions where I find myself tweaking details, but I’m not averse to doing so.  So on that note, I’ll share the T-shirt my mother sent, and which she had made for herself as well:  “I MAKE SHIT UP.”

It’s an ability I actually didn’t expect to use in my new career as a freelance writer, given that I’m not ghost-writing anybody’s fiction, and the majority of my work falls under the category of articles and informational blog posts and website content, with the occasional eBook thrown in.  But…  We have some decidedly offbeat clients for whom we write.

I’m very grateful to have steady work as a writer, but I’ll be honest: some of our regular clients truly make me want to bang my head on a wall.  Without naming any offenders, I’ll just say that in most cases it’s clear (as I read their instructions) why they’re hiring someone to write FOR them.  There’s “Client A,” whose instructions defy every known rule of English, or even sense:

Or, my all-time favorite from this client:

And there’s “Client B” who likes to try out her psychic powers to see if we can magically guess what she wants when she doesn’t say it at all in her project instructions.  Last week’s requested “press release” on the keyword-phrase “unique wedding rings” didn’t come with any information about a company name or website, and was ordered to match the style of an attached sample, which was an article (not a press release) written in casual conversational style.  I wrote precisely what she asked for (after double-checking to see if there were a specific company or URL to use), and then got the article kicked back with an angry diatribe about having asked for a press release on the named jeweler (which name she finally provided–rather too late).  I pointed out that I’d written precisely what she asked for, with precisely the (lack of) information provided–and charged her for a new article.  So maybe I should be glad she’s so messy, but actually I find her intensely frustrating to write for.

Last week I wrote two sets of travel articles for her, after which she wrote my boss that she was rejecting the second set because they had “clearly been written by a non-native speaker” and the “English was terrible!” When he pressed for details about why she would say such a thing (90% of her jobs have been done by a single writer–ME–and there was absolutely nothing wrong with my English on either set) she backpedaled with the limp excuse that she hadn’t even looked at the articles herself, and that one of her editors had made the comment.  (My theory? She’d messed up on instructions again and was looking to put blame elsewhere so she wouldn’t have to pay for a re-do with proper instructions…)

Another wonderful run-in with this client happened when the keywords she’d provided for a certain article showed up as “hits” on CopyScape.  Just the keywords (which I’m required to include, per her instructions), and not a single other word showed up as a duplication of anything else online, but she went ape-shit about how she expects not to get plagiarized work and she wouldn’t pay for any articles in that whole order.  Once again, my boss had to point out to her that the ONLY CopyScape hit was the required keyword phrase that she had provided, and she ended up backpedaling and paying up.

The same client sent us “The Importance of Utilization of Cell Viability Dyes in Flow Cytometry Experiments”–which my boss didn’t even think he could assign until I piped up with the note that I have degrees in biology and chemistry.  He was tickled (though he jokingly griped that his spell-checker was useless on the finished product, thanks to the science jargon and chemical compounds), and I was pretty pleased with myself–but the client wasn’t impressed.  She sent it back because I hadn’t covered one type of product (which the instructions had not specified I should cover), and demanded a re-write….

This is also the same client who submitted a student’s college research paper (which I wrote about in “Cheatin’ on a Cheater“), and yesterday a set of five articles with keyword phrases of “buy [product]” in which each of the “products” was an illegal street drug.  She provided no other instructions with that one, so she got five articles about “why it’s illegal to buy [product]” and the dangerous effects of each.  I’m guessing it’s not what she had in mind (though her instructions didn’t specify)–but that’s one where she won’t be getting a re-do from me if she comes back with instructions to write a “pro” variation.

Today’s order from this same client is a set of promotional articles about a variety of companies.  Her instructions are very specific in some areas–she wants promotional material including the services provided, why this company beats the competition, how long they’ve been in business, and how to contact them…  But she didn’t provide a single company name or URL.  Eight hundred words each, written for a specific company that she clearly has in mind–but zero information for the writer to work with.  I protested to my boss that this is a ridiculous thing for her to ask, and what did he propose I should do?

Can you guess how the cheeky bugger answered?  He quoted my T-shirt at me!  “Make shit up, Kana! Make shit up!”  So there we have it.  I’m grateful to have learned the art of lying at my mother’s knee.  This will be some QUATLY work for sure. 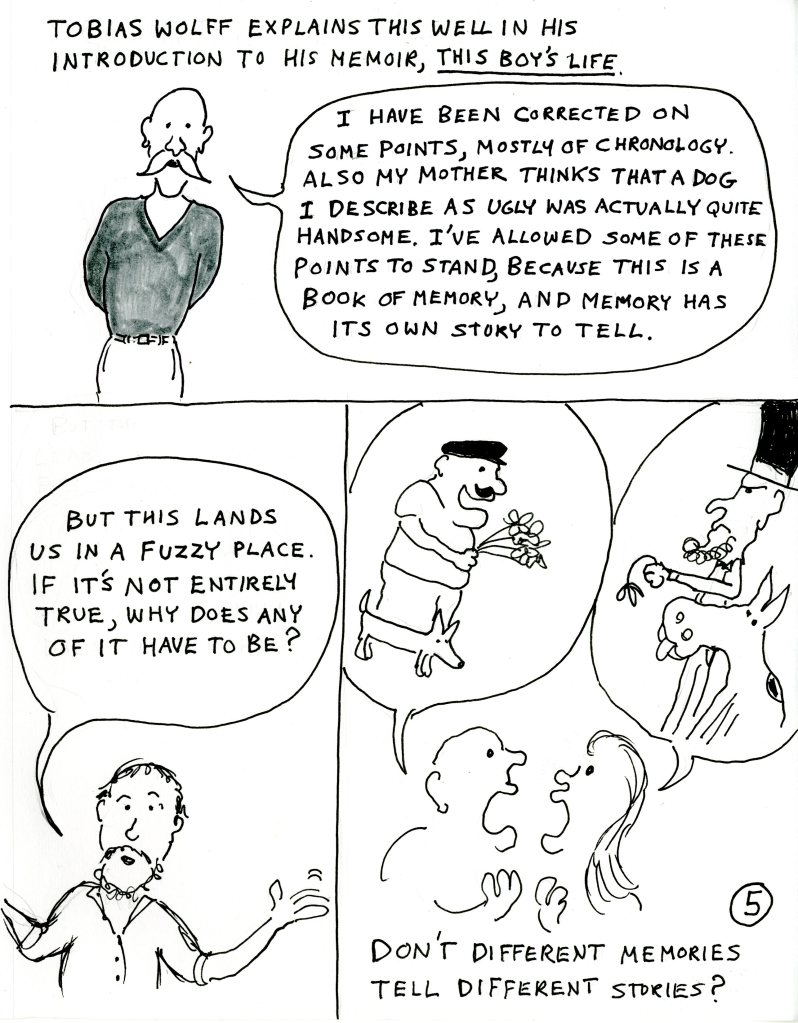 For more on the cartoon above, check out “Everything You Ever Wanted to Know about Truth in Nonfiction but Were Afraid to Ask“

I am... a writer, an explorer, a coffee-drinker, a recovering addict, a barefoot linguist, a book-dragon ("bookworm" doesn't cover it), a raconteur, a sailboat skipper, a research diver, a tattooed scholar, a pirate, a poet, a spiritual adventurer, a photographer, a few kinds-of-crazy, a joyful wife, a mom... a list-maker! :) View All Posts

28 thoughts on “On the Ethics of Storytelling, and the Art of Making Shit Up”