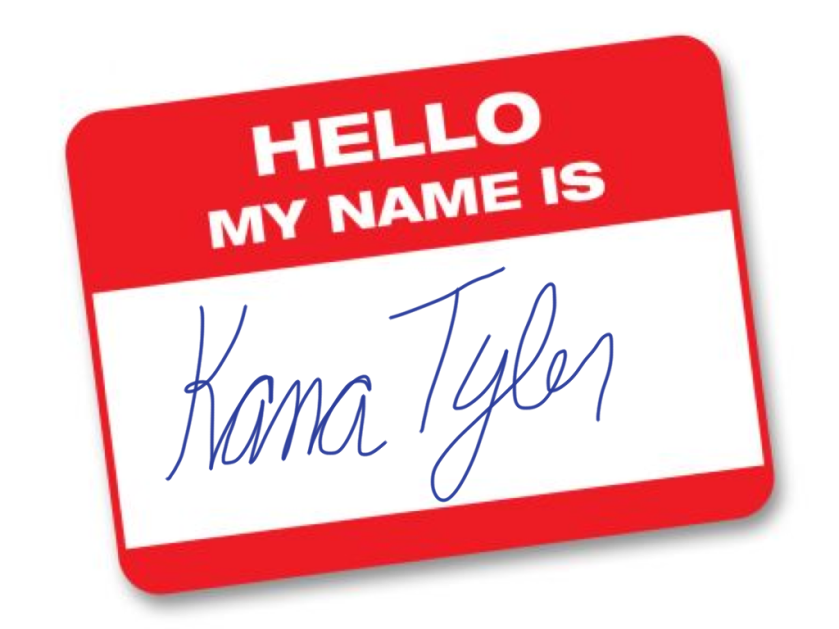 “Proper names are poetry in the raw.  Like all poetry they are untranslatable.”  ~W.H. Auden

I wrote the other day about my husband’s new life with new name, so it seems appropriate to share about mine as well.  My given name is Janna, which means “Gift from God.”  (And, interestingly enough, is a feminine form of my hubby’s given name of John…)  When my Hawai’ian husband and I met in rehab, he playfully started calling me “Kana Girl”—Kana being the transliteration of Janna to a language without a letter J.

We liked the idea that the Hawai’ian word “Makana” (often shortened to Kana when used as a name) also means Gift, so it serves as both a transliteration and a translation of the original.  And because I enjoy wordplay and layers of meanings, I’ll also gleefully note that “Kana” in Japanese is a form of writing, and “Kana” in the old Celtic languages (nod here to my Irish heritage) means “to sing.”  On the premise that a blogger might be a modern-day bard, I embrace those meanings as well.

Quick side-note, because several folks have asked about pronunciation…  Kana rhymes with…  iguana.  Don’t ask me what that rhyme-choice says about me! (Although “Kana” in Tamil means a small reptile, so maybe there’s our connection.)

When I married Keoni and added Makana to my legal name, it was in no way a repudiation of the lovely name my parents gave me.  It’s a fresh twist on the original –which I kept legally as my first name, though I use Kana now.  We have an A.A. friend named Dennis who describes his sober-self as “Dennis2.0”—and for the several years that I’ve been introducing and identifying myself as Kana, that’s how I’ve thought of the newer name.

As a fellow blogger (fittingly commenting under the handle ChangedbyChange) observed after my story about Keoni taking on a new name as he embarked on Sobriety: “It’s incredible how much of our identity is tied to our names isn’t it? I know many people who have gone by a different version of their names after a pivotal moment in life.”  So true!

The other piece of my marriage name-change I actually left in the hands of my son Christian, who was seven at the time.  He’s always been a serious-minded little guy, and I wasn’t sure how he’d feel about the idea of Mommy not sharing his last name.  (I was less worried about my daughter, who’s younger, whose personality is markedly different–and let’s face it, a last name often isn’t a permanent item for a girl anyway.)

So, without sharing my own preferences–namely, that I really didn’t want any part of my ex’s name stuck to mine, even though it’s also my children’s name, and even though I had publications and a professional reputation under that name–I asked Christian if I should hyphenate my name when I remarried, so as to keep a surname in common with him.  He looked at me with all his seven-year-old seriousness and decided, “That would be unnecessarily complicated, Mom.  You should just take Keoni’s name.”  I silently thank him for that decision every day.

I have actually been accused of trying to “hide my history” with my name-changing, given that (in addition to that professional reputation I mentioned) my criminal record and alcoholic reputation would also be more easily connected to my previous name.  I find the accusation pretty laughable, though, since I’m nothing if not open about my past. (In case you’re new to this space or have not been paying attention: I AM AN ALCOHOLIC.) Oops, there I go hiding my history again…

One more name change today… When I started up this site ten weeks ago, it was initially just a test-run for a freelance project I’d bid on, and for which I found myself needing to quickly get familiar with WordPress.  So I didn’t spend a lot of time or thought on naming it–and while “Kana’s Notebook” has been an accurate enough descriptor, it lacks a little in the “pizazz” department.  Since I’m a shameless fan of alliteration, I’m rechristening today: Kana’s Chronicles.

And with that…  This is Kana Iguana, signing off!

I am... a writer, an explorer, a coffee-drinker, a recovering addict, a barefoot linguist, a book-dragon ("bookworm" doesn't cover it), a raconteur, a sailboat skipper, a research diver, a tattooed scholar, a pirate, a poet, a spiritual adventurer, a photographer, a few kinds-of-crazy, a joyful wife, a mom... a list-maker! :) View All Posts

25 thoughts on “Words Have Meaning, Names Have Power”